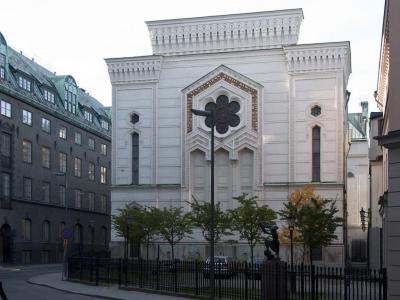 The Great Synagogue of Stockholm (Stockholms stora synagoga) was built in 1867-1870 to the designs by architect Fredrik Wilhelm Scholander made in 1862, described as a "paraphrase over Oriental motifs".The rectangular structure, framed by four towers, each containing a staircase, is said to mirror the Biblical description of the Jerusalem Temple. The building can hold up to 850 people at a time.

The Judiska biblioteket (Jewish Community Library), located beneath the synagogue, boasts a multilingual collection of books in Swedish, German, English, French, Hebrew, and other languages. It includes the library of Rabbi Marcus Ehrenpreis (1869–1951), who was Chief Rabbi of Sweden from 1914 to 1951. In addition to housing books and periodicals, the library also hosts occasional exhibits, plus annually sponsors exhibits dedicated to the history of the Jewish people.

One of the unique features of this building is the Holocaust Memorial set on the wall connecting the synagogue to the community hall. Engraved here are the names of over 8,000 Holocaust victims who were relatives of Swedish Jews. The memorial was dedicated by the King of Sweden, Carl XVI Gustav, in 1998.

A new mikvah in the basement of the synagogue was built in 2017.

Decorative inscriptions in Hebrew are etched and painted into the stonework of the Great Synagogue. Among them extract from Exodus 25:8-9, "And make Me a sanctuary that I may dwell among them" on the front facade, and two more inscriptions on the rear facade, quoting the building's formal name ("The Great Synagogue of Stockholm") along with the fragment of Isaiah 57:19: "Peace, peace, to him that is far off and to him that is near, saith the LORD that createth the fruit of the lips; and I will heal him."

Considered to be one of Stockholm’s most historic buildings, the synagogue has been listed in the Swedish registry of national historical buildings.
Image Courtesy of Wikimedia and I99pema.
Sight description based on Wikipedia.