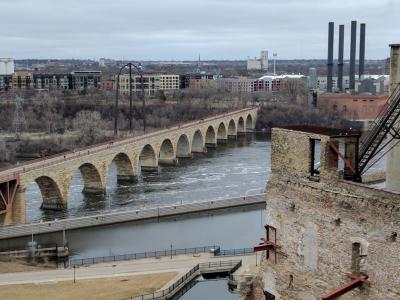 The Stone Arch Bridge is a former railroad bridge crossing the Mississippi River at Saint Anthony Falls in downtown Minneapolis. It is the only arched bridge made of stone on the entire Mississippi River. It is the second oldest bridge on the river next to Eads Bridge.

The Stone Arch Bridge was built in 1883 by railroad tycoon James J. Hill for his Great Northern Railway, and accessed the former passenger station located about a mile to the west, on the west bank of the river. For a time, the bridge was dubbed "Hill's Folly" until the value of Hill's new bridge as a passenger rail link became evident.

The Stone Arch Bridge in downtown Minneapolis is a former railroad bridge and the only arched bridge made of stone on the entire Mississippi River. The bridge was built between 1882 and 1883 to a design by Charles C Smith. It was commissioned by railroad tycoon James J. Hill with an aim to connect his Great Northern Railway system to the new Union Depot. For a time, the bridge was dubbed "Hill's Folly" until the value of Hill's new bridge as a passenger rail link became evident.

Hill originally intended to build an iron bridge spanning the Mississippi at Nicollet Island, but Smith discovered that pursuing that design would be detrimental to St Anthony Falls’ eroding sandstone. Smith's design was pioneering and the signature arches were designed to account for the falls and the surrounding topography. The stone used in construction was locally sourced, including granite from Sauk Rapids for the piers and magnesium limestone from Mankato and Iowa for the upper portion.

In the 130 years of its existence, the bridge has undergone a number of upgrades and repairs. In 1925 it was widened to make room for larger railcars. Ultimately, in 1994, it was converted to a pedestrian walkway.

The structure is now fully reserved for pedestrians and cyclists. In 1971, it was added to the National Register of Historic Places as a part of the Saint Anthony Falls Historic District. The bridge was designated as a National Historic Civil Engineering Landmark in 1974. The bike and walking trails across the Stone Arch Bridge are integrated into the city's park and trail system, and form part of the St Anthony Falls Heritage Trail. The most recent renovations—including indirect lighting—were completed in late 2005.

During the summer months, the Stone Arch Bridge is a focus of numerous festivals. The Stone Arch Festival of the Arts occurs on Father's Day weekend and features many local artists. Fireworks displays on the Fourth of July and during the Minneapolis Aquatennial in late July also bring crowds. The bridge offers views of the Minneapolis skyline, Pillsbury "A" Mill, the Mill City Museum, and many other places in the district, and is near both the restaurants of Main St SE and the Guthrie Theater.
Image Courtesy of Wikimedia and Runner1928.
Sight description based on Wikipedia.