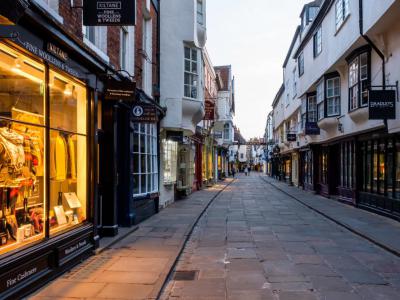 Stonegate is a street in the city center of York, in England, one of the streets most visited by tourists. Most of the buildings along the street are listed, meaning they are of national importance due to their architecture or history.

The street roughly follows the line of an old Roman road, which ran between what are now St Helen's Square and York Minster.

The street appears to have lost importance in the Anglian and Jorvik period. When York Minster was rebuilt in the 11th century, and stone for it was brought up the road, from a quay behind what is now York Guildhall. This appears to have brought the street back to prominence. Many of the buildings sit on the land belonged to the York Minster and the whole area soon becoming built up, mostly with tenements.

The street was known as "Stonegate" by 1119, probably named for stone paving, which would have been unique in the city at the time, although an alternative theory links the name to the stone hauled up to the Minster. Glass painters and goldsmiths became prominent along the road, while from the 1500s, it became known for printers and bookshops.

Because of the location of the street, it has historically been used for civic processions, from the York Guildhall to York Minster. It was also the site where three of the historic York Mystery Plays were performed. In 1570, Guy Fawkes, also known as Guido Fawkes for his involvement in the failed Gunpowder Plot of 1605, was born at a house on the street.

The British art historian Sr. Nikolaus Pevsner described the street as "perhaps the most attractive [street in the city], and one of the busiest. Narrow, quite long, and with a variety of good things". Due to its popularity with tourists, the street is pedestrianized. It was repaved in York stone in 2020.
Image Courtesy of Flickr and alh1.
Sight description based on Wikipedia.