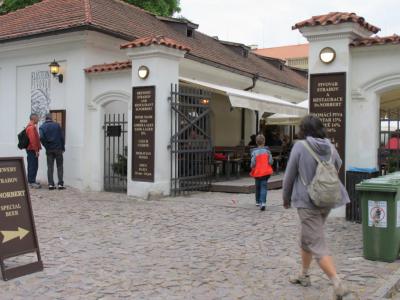 Not far from Prague Castle, the Strahov Monastery complex houses a brewery of unique atmosphere, which offers its own beer on site, with distinctive ambiance and excellent Czech cuisine. Its history is documented all the way back to around 1400 AD.

The present format of the Strahov Monastic Brewery includes three “locals” – a beerhall with its own copper brew-kettles and the two storey St. Norbert restaurant. During the summer months the brewery courtyard garden is open to visitors.

The history of the Royal canonicate brewery of the Premonstrates in Strahov is intertwined with the history of the monastery itself, founded in 1140. The first written record dates from the year 1400, when the brewery was rented out for ‘four times threescore groschen, a pound of pepper and one fattened hare per year’. In 1907 the brewery was closed, however, and in 1919 even converted into apartments. In the 1959 to 1963 period, the vaulting in the western part of the building was torn down and part-converted into a large hall, complete with a raised stage.