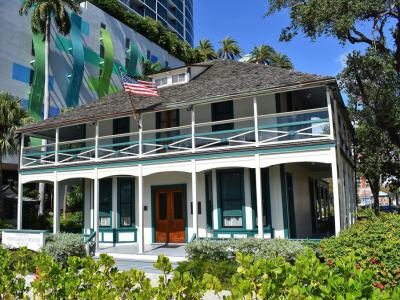 The house was originally not a home at all but a trading post. Frank and Ivy Stranahan constructed the building to be used as a community center as well as a center for trade. It also soon held a general store and bank. Eventually, in 1906, the Stranahans constructed a new building closer to the railroad for their business ventures and transformed this one into a home.

After Frank's suicide, Ivy chose to remain in the house while renting rooms to Fort Lauderdale visitors. She also leased the lower portion of the house to restaurants, which remained in place even after Ivy's death in 1971. She left the house to the Seventh Day Adventist Church, which sold the property to the Historical Society of Fort Lauderdale.

Visitors can now tour the Stranahan House Museum where they can learn more about the history of the home and the Stranahans themselves. They will also learn about horticulture and agriculture of the region, Native American history and culture, literature and geography.

Stranahan House is located at the east end of the Fort Lauderdale Riverwalk. The home, once at the forefront of development in the area, is now nestled between condominiums, restaurants and a large parking garage. However, it still looks out over the New River as it did when it was first constructed over 100 years ago.

Tips
Visitors should plan their trip to Stranahan House in advance. Tickets are sold online and all tours of the home's interior are guided. There are only three tours each day. They are available from 1 to 3 PM. Each guided tour lasts one hour.
Image Courtesy of Wikimedia and Tamanoeconomico.