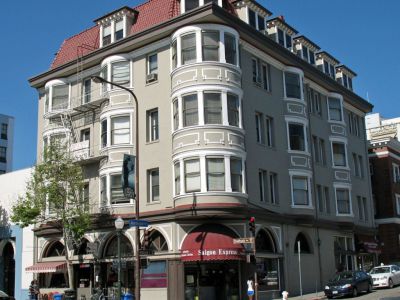 The Studio Building is a historic building, listed on the National Register of Historic Places. It dates back to 1905, and at the time of its building was the tallest building in downtown Berkeley. It was built by Frederick H. Dakin, for use by his real estate investment company. The architect is not recorded.

The building is five stories tall and built of masonry with a tiled mansard roof and rounded upper floor window bays. The first-floor bays, used as shop fronts, were originally built in the form of a series of alternating rounded and pointed arches, although some of these have since been covered. The building's name is set into the tile floor at the entrance, and derives from the fact that the top floor of the building was designed as artists’ studios.

The building was restored in the late 1970s, and has been on the National Register of Historic Places since 1978.
Image by Sanfranman59 on Wikimedia under Creative Commons License.
Sight description based on wikipedia