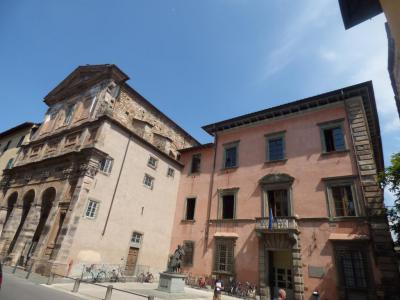 The Suffrage Auditorium (Auditorium del Suffragio) is the former Roman Catholic church (Chiesa del Suffragio) in the historic center of Lucca, which is now used as a theater. The church was erected in 1634 on the site of a cemetery where victims of the plague of 1630–1631 had been buried, and is one of the few temples in the city built from scratch during the 17th century.

Although consecrated in 1646, the church was fully completed only in 1675, when a majestic Baroque altar with four spiral Solomonic columns was installed (presently removed to the Ajaccio Cathedral in Corsica). Of a particular interest is the façade with three orders marked by pilasters, which in the lower register enclose three arches that define a vaulted vestibule offering access into the building. The venue has a seating capacity of over 200 and is used for both musical and theatrical shows.

Next door to the Auditorium is the Instituto Boccherini (Institute of Musical Studies "Luigi Boccherini"), formerly known as the Instituto Pacini, in which young Giacomo Puccini had studied from 1872 to 1880. Among its relics are the valuable collection of Puccini’s childhood compositions, as well as some from his time in Milan (1880-1883), plus the piano and harmonium on which the future maestro practiced. Also preserved here are some compositions by Puccini’s ancestors, donated by his father Michele Puccini, who had taught at the Institute from 1843 and became its director in 1862 – a position he held until his death.

During the years when Puccini was a student, however, the Institute was located at Piazza Santa Maria Forisportam in an ancient monastery complex.
Image Courtesy of Flickr and Elliott Brown.