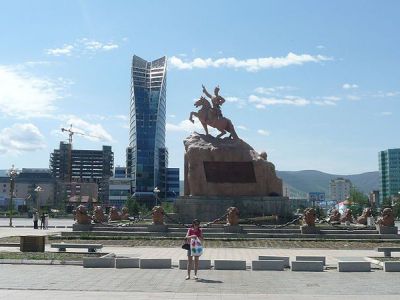 Sükhbaatar Square is the central square in Ulan Bator. It is named after and features a statue of Damdin Sükhbaatar, leader of Mongolia's 1921 revolution. It is located in front of the Saaral Ordon. Major buildings on the square include the Government Palace (built in 1951), the Golomt Bank, the Central Post Office, the Culture Palace and, until 2005, the Sükhbaatar mausoleum. Besides the Sükhbaatar monument in the middle of the square, one can find several other statues, including Genghis Khan and two of his generals in front of the Government House and the Jamsrangiin Sambuu monument in the northwestern corner.
Image Courtesy of Wikimedia and Brücke-Osteuropa.
Sight description based on Wikipedia.

Want to visit this sight? Check out these Self-Guided Walking Tours in Ulan Bator. Alternatively, you can download the mobile app "GPSmyCity: Walks in 1K+ Cities" from iTunes App Store or Google Play. The app turns your mobile device to a personal tour guide and it works offline, so no data plan is needed when traveling abroad.

Create Your Own Walk in Ulan Bator

Creating your own self-guided walk in Ulan Bator is easy and fun. Choose the city attractions that you want to see and a walk route map will be created just for you. You can even set your hotel as the start point of the walk.

Ulan Bator has a rich and mysterious history. It is home to many historic landmarks and prominent monuments. Among them are the celebrated Genghis Khan Monument, Lenin Monument, Beatles Monument and many others. Take the following tour to visit the famous monuments of Ulan Bator city Center !