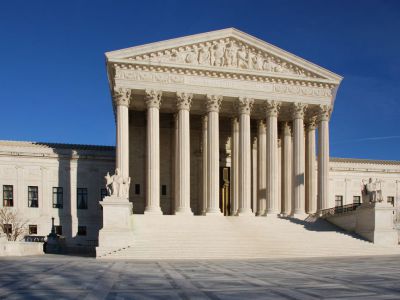 Prior to the establishment of the Federal City, the United States government resided briefly in New York City. As such, the Supreme Court met there during that time in the Merchants Exchange Building. When the capital moved to Philadelphia, Pennsylvania, the Court moved with it and began meeting in Independence Hall, before settling in the Old City Hall from 1791 until 1800.

The Supreme Court Building was designed by architect Cass Gilbert. It rises four stories (92 ft (28 m)) above ground. The cornerstone was laid on October 13, 1932, and construction completed in 1935, having cost $94,000 under the $9.74 million budget authorized by Congress. "The building was designed on a scale in keeping with the importance and dignity of the Court and the Judiciary as a coequal, independent branch of the United States Government, and as a symbol of 'the national ideal of justice in the highest sphere of activity."

The public façade of the Supreme Court Building is made of marble quarried from Vermont, and that of the non-public-facing courtyards, Georgian marble. Most of the interior spaces are lined with Alabama marble, except for the Courtroom itself, which is lined with Spanish ivory vein marble. For the Courtroom's 24 columns, "Gilbert felt that only the ivory buff and golden marble from the Montarrenti quarries near Siena, Italy" would suffice.

The west façade of the building (essentially, the "front" of the court, being the side which faces the Capitol) bears the motto "Equal Justice Under Law," while the east façade bears the motto "Justice, the Guardian of Liberty."
Image by Jarek Tuszynski on Wikimedia under Creative Commons License.
Sight description based on wikipedia