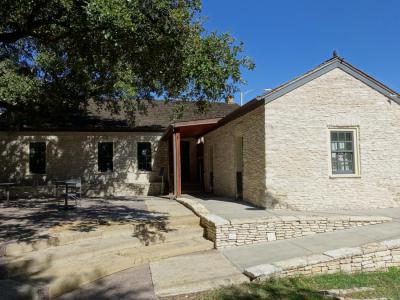 Built in the “rubble-rock” style of architecture, brought to the Texas Hill Country by German immigrants, this 19th century home is a historic landmark and the only remaining residence of Susanna Dickinson who's gone down in history as the "Messenger of the Alamo." Having survived the Battle of the Alamo, she carried the news of its fall to Sam Houston, which ultimately led to Houston's defeat of Santa Anna at the Battle of San Jacinto and won independence for the Republic of Texas.

The house was constructed in 1869 by Joseph Hannig, Susanna's husband. In appreciation for her exploit, Joseph and Susanna Dickinson Hannig's home – deeded to the City of Austin in 2003 – was saved, restored and opened as a museum on March 2, 2010, Texas Independence Day.

Inside the museum there are rare Dickinson family artifacts, as well as furniture produced by Hannig. The couple had lived in this house for six years, until 1875, upon which they moved into the part of town known as Hyde Park.

The museum forms part of Brush Square Museums, along with the O. Henry Museum and the Austin Fire Museum. If you are a history buff, you may want to stop by this lovely museum to let yourself showed around the property and recount the vivid stories of the survivors of the Battle of the Alamo.