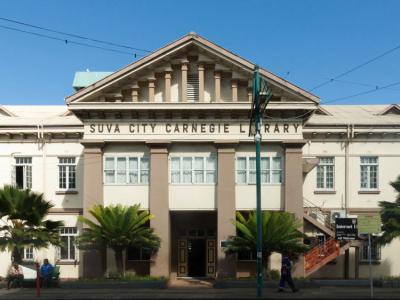 Along with many other countries, Fiji was once the recipient of a grant from Andrew Carnegie for a public library. In 1908, the philanthropic steel magnate provided £1,500 to build the library, with the Suva Town Board providing a building site and £150 per year to maintain the property.

According to Isimeli Cerelala and Frances Pene, writing in their book Suva City Carnegie Library 100th anniversary 1908-2008, the Fiji government “provided a prominent site for the library premises in Victoria Parade between the Victoria Memorial Hall and the former Suva Boys’ Grammar School, now occupied by Government’s ITC [Information Technology and Computing Services].”

The library, built on one of the two waterfront sites that did not have to be reclaimed, opened in late 1909 with an initial collection of 4,200 books. The foundation stone of the original section, in the middle of the current structure, was laid by Gov. Everard im Thurn on Sept. 1, 1908, while G.J. [Gabriel] Marks was warden (mayor) of Suva.

In 1953, the book depository's name was changed to Suva City Library. The next year, the Fiji Museum, which had occupied the top floor of the library since 1930, moved to its new quarters in the Suva Botanical Gardens, later renamed Thurston Gardens.

As for the library itself, it witnessed many changes throughout its first century, including a return of “Carnegie”, in 2008, to the official name, introduction of internet service, a children’s library, a mobile library service, a significant renovation and a number of progressive programs that integrate the library with the needs of its patrons.
Image Courtesy of Wikimedia and Matthias Süßen.