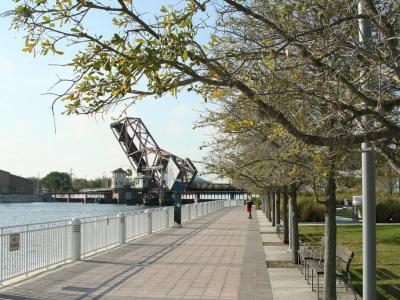 Winding its way along downtown Tampa's waterfront for nearly two and a half miles, the Tampa Riverwalk connects many of the city's top attractions. The beautifully manicured and landscaped path is a mecca for commuters, joggers, and visitors alike. The park serves as a community hub for the arts, outdoor activities, and live music.

The Riverwalk is an attraction in and of itself, with stunning views of Tampa Bay and downtown. But along the path, you will also find many of Tampa's other top attractions, including the Florida Aquarium, the Tampa History Center, the Glazer Children's Museum, and the David A. Straz, Jr. Center for the Performing Arts.

You will find the bronze and marble busts of Tampa's most influential and noteworthy people along the Riverwalk. Through these busts, the Historical Monument Trail tells the story of the history of Hillsboro County and the City of Tampa. There are currently 30 honorees along the Trail, with each character representing a unique and vital part of the region's history.

Tampa's Riverwalk connects parts of the city in ways that other metropolitan areas can only dream of. The green space provides a break from the hustle and bustle of town, and it transitions the city to the peaceful surroundings of Tampa Bay. The trail is walkable, bike-able, and Segway-able, allowing you to move between visitor hot spots without getting in your car.

- Grab a refreshing drink at the Sail Pavilion, Tampa's only 360-degree open-air waterfront bar.
- Rent a water bike from the Tampa Bay Water Bike Company to view the beautiful Tampa skyline from the water.
- Want to branch out and visit some other areas of Tampa? Hop a ride on the Pirate Water Taxi, which has 15 stops along the Riverwalk, Channel District, downtown, and Davis Island.
Image by Barbthebuilder under Creative Commons License.