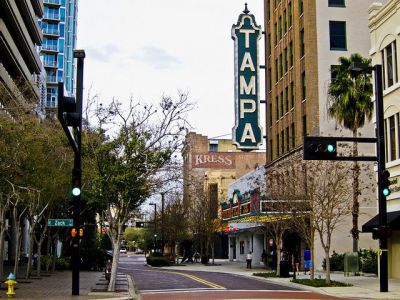 Step back in time to the golden years of film by visiting this authentic downtown movie palace. Built in 1926, the Tampa Theatre was rescued from sharing the fate of many of its brothers and sisters by a group of loyal community residents and supporters. It reopened in 1978 and became a model of how a community could save a golden-age theater.

Several renovations over the years have made the venue shine. The original opulent interior is like a time capsule. Everything, from the seats to the wall tapestries, has been made to match the original 1926 decor. Even the paint colors and carpets match the original look.

The theater hosts a wide range of foreign, independent, and documentary films. It operates as a non-profit, supported entirely by ticket and concession sales and community donors. With its perfectly renovated spaces, the location has been used as the backdrop for many movies and TV scenes.

John Eberson designed the Tampa Theatre as an atmospheric theater. These designs used architectural elements and decor to make viewers feel like they're in a specific place outdoors. The style of this particular theater was made to simulate a Mediterranean courtyard under the night sky. The theater features old-world statues, flowers, and gargoyles, with a nighttime sky overhead complete with twinkling stars and floating clouds.

The Tampa Theatre is one of the only surviving movie palaces left from the 1920s. Most of these extravagant theaters were demolished as Americans moved out of urban centers and into the suburbs. As movie-going crowds diminished and ticket sales slumped, the land under these movie palaces became more valuable that the theaters themselves. Several other factors contributed to their decline, including laws the prohibited film studios from owning the theaters and the wide spread adoption of television.

The theater is listed on the National Register of Historic Places and is a Tampa City Landmark. It is owned by the city and operated by the Arts Council of Hillsboro County.

Look for the theater's original Mighty Wurlitzer Theatre Organ, operated nightly before shows by a crew of volunteer organists from the Central Florida Theatre Organ Society.
Image by daneshjai on Flickr under Creative Commons License.