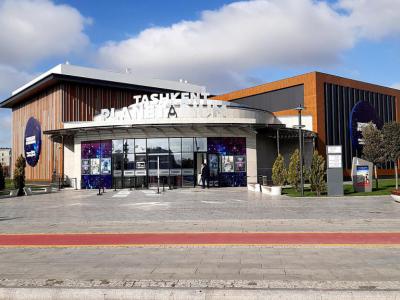 The Planetarium of Tashkent was built in 2003 and is located in the Abdula Kadir Park, near the Circus and famous Chorsu Bazaar. It was opened on the 12th anniversary of the country’s independence. Inside the Planetarium is the latest equipment “Planetary MS-6”, which offers more clear and precise photos that can be seen on the slide shows in the main hall. One can also observe the solar system, the signs of zodiac, Aurora Borealis and comets which will transport you to a completely different world. All the latest discoveries in astronomy can be seen here.

There are two main halls at the Planetarium, and each hall has its own functions. The first hall is mainly built for showing the Solar System and space, using Japanese technologies. The second hall contains artefacts, where visitors can learn more about specific planets and about Earth.

In 2008 a group of scientists at Tashkent Planetarium discovered the new planet "Samarkand".
Image Courtesy of Wikimedia and Mysportedit.
Sight description based on Wikipedia.