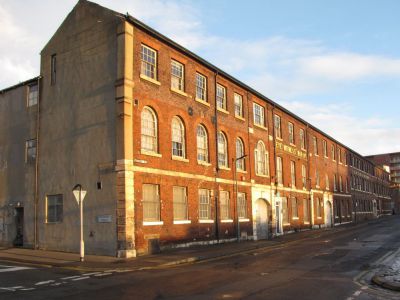 Taylor's Eye Witness Works is an industrial building situated on Milton Street in the Devonshire Quarter area of Sheffield city centre, South Yorkshire, England. The works are a Grade II listed building which since their foundation in 1852 have always specialized in producing kitchen and pocket knives along with various associated products. The building is believed to be the only traditional works in Sheffield which still manufactures its original products. The building is constructed from red brick, ordinary quality bricks were used for the original construction while a harder and darker engineering brick were used for the later buildings. The building is rectangular in shape being delineated by Milton Street, Thomas Street, Headford Street, and Egerton Lane, at the rear. There are three internal courtyards but much of this space has been filled by other buildings over the years. The main range of the works on Milton Street has 30 bays of windows and some basements.
Image Courtesy of Wikimedia and Mick Knapton.
Sight description based on Wikipedia.