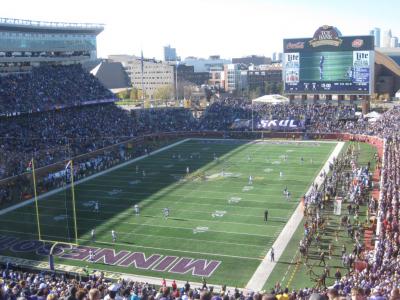 TCF Bank Stadium is an outdoor stadium located on the campus of the University of Minnesota. Opened in 2009, it is the home field of the Minnesota Golden Gophers of the Big Ten Conference, and was the temporary home of Minnesota United FC of Major League Soccer. The stadium also served as the temporary home of the Minnesota Vikings of the National Football League for the 2014 and 2015 seasons during the construction of U.S. Bank Stadium.

TCF Bank Stadium also boasts the largest home locker room in college or professional football and one of the largest video boards in the nation.

The 50,805-seat stadium cost $303.3 million to build and is designed to support future expansion to seat up to 80,000. The stadium is a horseshoe-style stadium which organizers said would have a "traditional collegiate look and feel". On December 7, 2006, the university announced that the stadium's field would be laid out in an unorthodox east–west configuration, with the open west end of the stadium facing campus. This layout, similar to that of Memorial Stadium, provides a view of downtown Minneapolis.
Image Courtesy of Wikimedia and Jason7373.
Sight description based on Wikipedia.