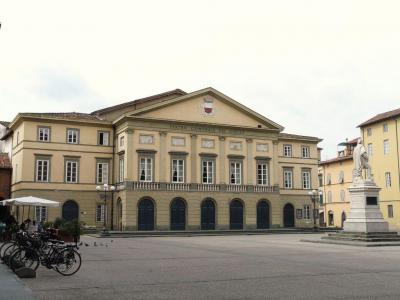 Teatro del Giglio (Theater of the Lily) is a historic theater and opera house in Lucca, located in the eponymous Piazza del Giglio (Lily Square). The original theater on this site, known as Teatro Pubblico (Public Theater), was inaugurated in 1675 and later destroyed by fire. A new theater in its place, rebuilt after the Napoleonic war in 1818, features a Neoclassical style with rusticated portico, surmounted by a balustrade upholding pilasters that lead to a tympanum with the coat of arms of the city.

The frieze on the front carries the inscription “Teatro Comunale del Giglio”. The name giglio (“lily”) derives from the fleur-de-lis emblem, which was part of the Bourbon heraldic shield of the reigning duchess, Maria Luisa of the House of Bourbon.

During the 19th century the theater underwent modification, seeing first gas and then electric lights installed – in 1872 and 1911, respectively. Famous all over the world for its extraordinary acoustics, the building became the stage of choice for Giacomo Puccini's operas. Here, from 1891 to 1924, the maestro had personally supervised the staging of Edgar, Manon Lescaut, La Bohème, Tosca, Madama Butterfly, and the Girl of the West.

The theater brought glory to the musician, seeing him progress from “chronicle to myth”. Giacomo Puccini is still very much present at the Giglio today, not only as the name on billboard that pays homage to his greatness every season, but also as the spirit that is felt on the stage, in the boxes and stalls, as well as in the musicality of the typical cadence of the "talk about Lucca".

The Teatro del Giglio is annexed to the Auditorium Theater and the old convent church of San Girolamo’s library holding a fund of approximately 4,000 volumes and recordings of shows since 1985.
Image Courtesy of Wikimedia and Davide Papalini.