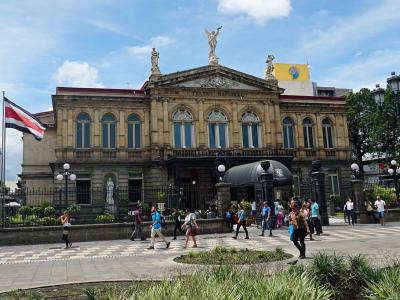 Teatro Nacional is the national theater of Costa Rica. You will find it in the central section of town. This national treasure was started in 1891 with the construction of the building that would house the company. The first theatrical presentation took place in October of 1897, when Wolfgang von Goethe’s “Faust” debuted to the delight of the crowd there.

The glory days of the theater came during the time when coffee exports for the country were at their best. There were many good patrons of the arts, and therefore the quality of the performers could not be beaten. At one point, there was also a tax on coffee dedicated to the arts. That kind of free-flowing money also shows in the design of the building that houses the company. If you ask any local, the Teatro Nacional is considered the most historic structures in all of San Jose. It is well known for lavish furnishings and a beautiful, rich looking interior that was designed to rival the great theaters of Europe.

In the front of the theater is a statue of Calderon de la Barca and Ludwig van Beethoven, which are worth taking a moment to check out. The same statues are featured on some of the country's paper money. The theater regularly performs several times a week, so you may want to catch a performance while in San Jose.

Tip:
If you go on the hour, ask for the free English tour included in the ticket price to learn a bit of history and details about the place. Otherwise, without showing a ticket, you can go on a circa 40-50min paid tour (also on the hour), which is time and money well spent.