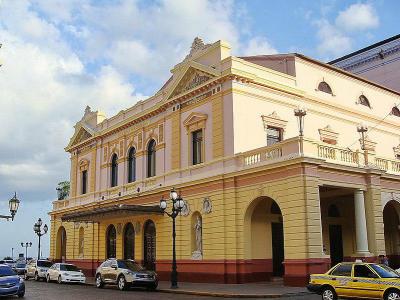 Teatro Nacional de Panamá, or the National Theater of Panama, is located on Avenida B, just down from Plaza Bolivar. It opened in 1908 and was constructed on the site that originally housed an 18th century monastery, designed by Italian architect Genaro Ruggieri. Throughout its history, the building has seen good and bad days during which, at some point, it served as a house for movies and a popular watering hole for the elite crowd.

The theater has endured a profound restoration undertaken in two phases: first in the 1970s and the second, more recently, in the early 2000s, upon which it finally reopened in 2004. Adorned with glittering glass chandeliers, gold painted balconies and exquisite ceiling murals, the interiors of the building are truly posh. Busts of famous writers are placed upfront. The theater is a major cultural hub that hosts cultural events like plays, operas and ballets.

The ceiling frescoes have been painted by a prominent Panamanian artist, Roberto Lewis, and depict Panamanian history in the form of Greek mythology. You can learn the theater schedule from the local papers and go for an opera show whenever you get the opportunity, whilst in the city. This is really the best way to check out the building.
Image by José Porras on Wikimedia under Creative Commons License.