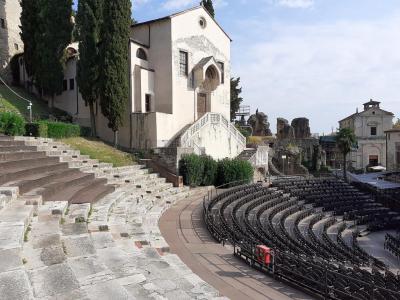 Well-known for its many concerts, music performances, and ballets, the Roman Theatre seats 25,000 people. Having actually been built during the 1st century AD, it is one of the oldest monuments in Verona.

For centuries, the ruins of the theater were buried underneath residences constructed on the property. In 1834, a Veronese named Andrea Monga bought all the houses built on the property, then demolished them and began the renovation process. It is because of his efforts that the structure was saved.

In 1904, the city purchased the property and continued renovations until the 1970s. Although most of the structure was lost due to the ravages of time, the cavea, tier of seats, several arches of loggias, and parts of the stage and the old theater were recovered. One can truly take a step back in time when visiting the Roman Theatre.

The theater is well-known for its Shakespeare Festival held from June to August each year. Jazz concerts in May, plays in June, and ballets in August are just some of the treats to enjoy. Admission is free on the first Sunday of each month.

Tip:
If you brave the climb up the seven flights of stairs, make sure you have your ticket with you or you'll be denied access at the top. One admission ticket gains access to both the Roman Theatre and the Archeology Museum right above it.