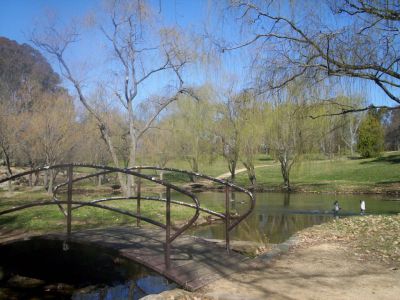 Telopea Park is one of the oldest parks in Canberra, Australia. The name of the park is from Walter Burley Griffin's original plan for Canberra where he planned Telopea Park at the end of Sydney Avenue. The park is named after the floral emblem of New South Wales, also known as the Waratah. Griffin planned that the state capital city avenues were terminated with a park named after the generic botanical name for a native plant from that particular state. The park covers 0.079 km².

The park was established in 1922 and is very long and thin, with many large native and introduced trees. A stormwater drain runs along the middle of the park, which is crossed by several bridges. The park has barbecue areas and playground equipment, and is a popular destination. It is bounded by Telopea Park West (street) and Telopea Park East (street) on either side, with Manuka Oval at the southern end, across New South Wales crescent, and Bowen drive on the Northern End, near Lake Burley Griffin. The park is between the suburbs of Barton and Kingston close to Lake Burley Griffin.
Image by Cfitzart on Wikimedia under Creative Commons License.
Sight description based on wikipedia

Want to visit this sight? Check out these Self-Guided Walking Tours in Canberra. Alternatively, you can download the mobile app "GPSmyCity: Walks in 1K+ Cities" from iTunes App Store or Google Play. The app turns your mobile device to a personal tour guide and it works offline, so no data plan is needed when traveling abroad.