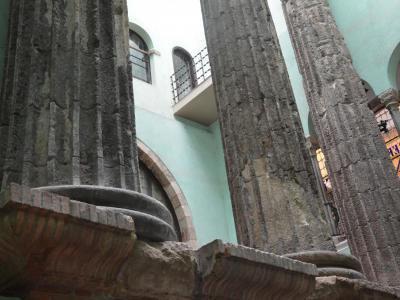 Placing a Roman temple inside medieval Gothic walls is quite a remarkable idea and its preservation is testimony to Barcelona's great care towards history.

Named a Cultural Asset of National Interest, the Temple of Augustus was built during the Imperial Period, acting as the city’s central structure. At some point, it was demolished and its ruins were not discovered until the late 19th century when three of its columns appeared on the construction site of Centre Excursionista de Catalunya. A fourth column was then exhibited at the Plaça del Rei and was later added to the structure, as it can be seen nowadays.

According to studies, the temple originally had 11 columns on each wing, including corner columns, and with 6 on the front and further 6 hinder part. The whole building would have been 35 x 17.5 metres in size, erected on a podium a third the height of the columns. When on-site, look for the very helpful photographs and recreations of this ancient landmark.