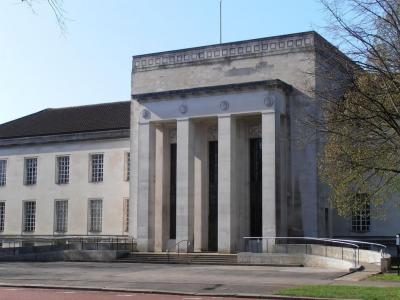 The Welsh National Temple of Peace and Health, also known as the Temple of Peace, is a non-religious civic building in the civic centre of Cardiff, Wales. It was designed by the architect Sir Percy Thomas. The Temple of Peace was opened on 23 November, 1938. It was a gift from Lord Davies to the Welsh people. He wanted it to be “a memorial to those gallant men from all nations who gave their lives in the war that was to end war” and so it was dedicated to the memory of the loss of life as a result of the 1914 - 1918 War. The building, built in the form of the letter ‘T’, has two wings. Made out of Portland stone, the roofs of the wings are dark red, Italian pattern tiles. You can hardly miss the large pillars facing you as you enter. Behind these columns of portico are three large windows, above which are panels depicting figures representing health, justice and peace. The arms of England, Scotland, Ireland and Wales can also be seen.

This sight is featured in a self-guided walking tour of Cardiff, Wales within the mobile app "GPSmyCity: Walks in 1K+ Cities" which can be downloaded from iTunes App Store or Google Play. Please download the app to your mobile phone or tablet for travel directions for visiting this sight. The app turns your mobile device to a personal tour guide and it works offline, so no data plan is needed when traveling abroad.