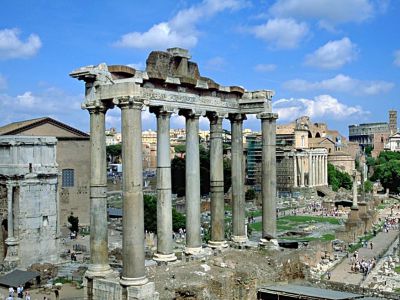 The Temple of Saturn is, without a doubt, the most iconic structure on the Roman Forum, with its monumental columns being the postcard image of the legendary ruins. It sits at the base of the Capitoline Hill, next to the Arch of Septimius Severus.

The history of the temple starts in the 5th century BC when it was built by Tarquinius, the last king of the city-state of Rome prior to the rebellion that led to the establishment of the Roman Republic. The structure endured several modifications since and what we see today is the latest restoration following the devastating fire that took place in the 3rd century BC.

After serving as a temple of Saturn, it then housed, at some point, a bank, which is only logical given that Saturn was the god of wealth and abundance. The Romans also worshiped him as the god of agriculture. Later, as they embraced the Greek pantheon of gods, Saturn was identified with Kronos and became the highest ranking of the Roman deities, at par with Jupiter. With the winter solstice also being in high regard by the Romans, the week-long winter festival they celebrated, marking the return of the sun to the northern hemisphere, was called Saturnalia. The final day of the festival, known as the day of "the invincible sun", fell upon December 25. The festival involved lavish feasting and exchange of gifts, quite similar to the contemporary Christmas tradition.

The last standing eight majestic Ionic columns of the temple produce the impression of grandeur that is usually associated with Rome. Facing them up close, one can truly feel like a tiny speck of sand in the endless ocean of time...

Why You Should Visit:
An excellent psychological "shake-up", along with other Roman Forum sites.

Tip:
Try and view reconstructed images to really appreciate how the temple must have been in ancient times.