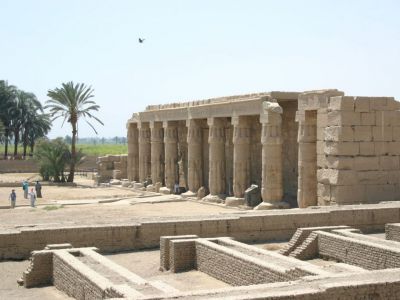 Temple Of Seti I, Luxor (must see)

The Temple of Seti I was begun at the end of the pharaoh’s reign and is thought to have been completed by his son, Ramses II. It was dedicated to Ramses I, father of Seti I, who ruled for just two years, a period too short to have developed his own mortuary temple. Seti I was a powerful pharaoh and ruled the Upper and Lower Kingdoms of ancient Egypt efficiently. He was the second pharaoh of the 19th dynasty and his reign is thought to have extended from 1290 to 1279 B.C. Seti was the founder of the Valley of Queens and his mother was the first to be buried there.

Many of the ceilings and walls are in good condition, which provides the visitor with a good idea of how it must have appeared when recently constructed. At the site there are two engraved stelae, which depict visits to the temple by Seti I and Ramses II. At the entrance portico of the temple there are nine of the 10 remaining engraved pillars. You continue through to the Hypostyle Hall where there are many rooms and sanctuaries leading off it. In the Royal Rooms there are carvings that depict important events in the reign of both Seti I and Ramses I.
Image Courtesy of Wikimedia and Zanaq.