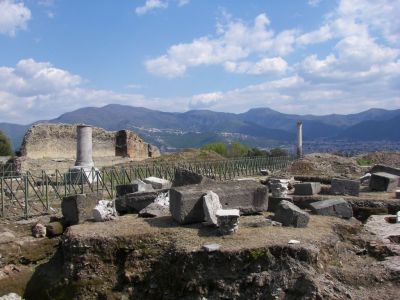 Pompei as a city is fairly compact, its grid of streets tightly packed onto a hillside. At the western edge of the centre, you reach the top of the hill close to the Temple of Venus. On a hot summer’s day in southern Italy, the uphill walk can be a struggle. A visit to the temple can be hard work, but visitors are rewarded with stunning views of the River Sarno and Gulf of Naples below. The temple was built here by the Sullans, a Roman faction who invaded Pompei in 80 BC, fully enforcing Roman culture and language on the city for the first time.

As one of the first buildings completed under this new regime, the Temple of Venus was built in accordance with strict Roman architectural guidelines. Facing towards the sea, it was formed from a wide tufa podium, surrounded by porticos, with marble decoration throughout. Built as a symbol of the wealth and status of the Sullans, as well as a fitting place of worship for the Roman goddess of love, it is thought to have been the finest temple in Pompei. Sadly, its prominent position, close to the city walls, made it a target for invaders, meaning it was largely ruined when first rediscovered two centuries ago.
Image by Wknight94 on Wikimedia under Creative Commons License.