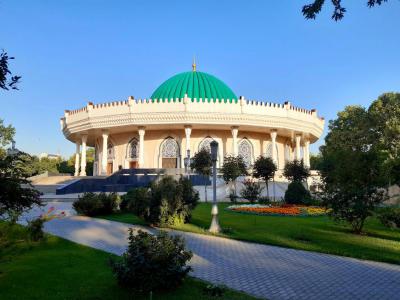 The Temurid History (aka Amir Timur) Museum in Tashkent is one of the most beautiful museums in Uzbekistan. It opened in 1996 and since then has become one of the city's top tourist attractions.

After Uzbekistan became independent in 1991, much attention was given to the revival of the nation's spiritual and cultural heritage, including recognition of historical persons who played an important role in the world's civilization. Among those was Amir Temur (aka Tamerlane), the Turco-Mongol warlord, politician and reformer, patron and promoter of science, education, trade, and culture (fine arts, music and poetry, and craft). Having established a great centralized state, he united many peoples under his rule, laying foundations of the so-called Timurid Renaissance in Asia.

The then President of Uzbekistan, Islam Karimov, encouraged celebration of Timur, linking the Mongol ruler's achievements with his own style of governance. Karimov declared 1996 to be the “Year of Amir Temur”, and the 660th anniversary of Timur was celebrated with pomp in Uzbekistan. Subsequently, the republic resolved to have a national museum in the capital, solely dedicated to the Timurid history.

The museum's ceremonial opening, on 18 October 1996, was attended by many local and foreign dignitaries. Built in the medieval style, with a blue cupola resembling that of the Gur-e-Amir mausoleum in Samarkand, the museum building is a true architectural landmark.

Inside, there is a priceless collection of artifacts belonging to the Temurids era, comprising over 5,000 artifacts. More than 2,000 items, permanently displayed, are thematically grouped. The main focus is on the genealogy of Amir Temur, his coming to power, the military campaigns of Sahib Kiran, diplomatic and trade relations, workmanship, urban development and landscaping, as well as science and education. The exhibits include maps, weapons, copper and silver coins, miniatures, rare manuscripts, potteries, and jewelry.

Each year, more than two million people visit the museum. For those interested in the oriental culture and history, and particularly the reign of the Temurid dynasty, this place is a must.
Image Courtesy of Wikimedia and Mysportedit.