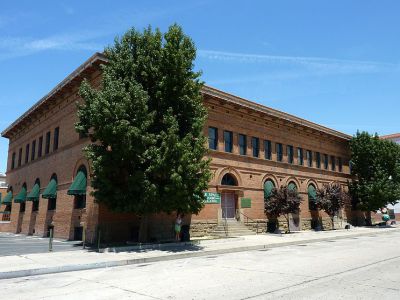 The Tevis Block, also known as the Kern County Land Company Building, is a historic office building in Bakersfield, California. The structure was placed on the National Register of Historic Places on March 29, 1984.

The Tevis Block is a two-story, U-shaped structure constructed of imported fire brick. The front, south-facing facade has fanlight windows and terra cotta arches. Each floor is articulated differently and treated with a different order and finish. Basement windows are rectangular and bottom-hinged with a flat lintel. The first floor windows, two-sash and divided vertically with the fanlight transom, are enhanced by the brickwork to give the appearance of including mezzanine windows. The second-story windows are single-light sash with flat radiating bricks above. The rear of the building includes an enclosed elevator, added later, and a second-story, iron-railed walkway. An additional one-story brick wing was added to the building northwest corner in later years.
Image by Bobak Ha'Eri on Wikimedia under Creative Commons License.
Sight description based on wikipedia