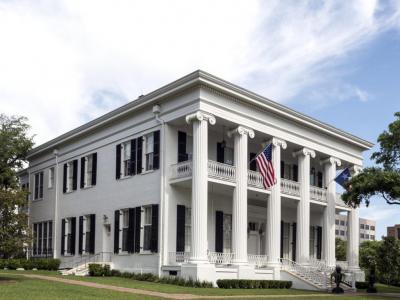 On June 8, 2008, while midway through a major renovation, the mansion was damaged badly by an arson fire started with a Molotov cocktail.

Built by Abner Cook in a Greek Revival style and completed during 1856, the building occupies the center of a block and is surrounded by trees and gardens. The original mansion was 6,000 square feet (560 m2). Remodeling during 1914 increased the size of it to 8,920 square feet (829 m2). The original mansion had 11 rooms but no bathrooms. The remodeling brought the room count to 25 rooms and 7 bathrooms. In 1931, at the recommendation of former Texas First Lady Mildred Paxton Moody, the 42nd Texas Legislature established the Board of Mansion Supervisors to oversee all interior and exterior upkeep and enhancements to the mansion.
Image by Carol M. Highsmith on Wikimedia under Creative Commons License.
Sight description based on wikipedia