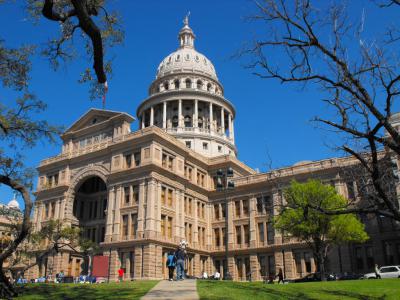 The Texas State Capitol in Austin is the fourth local building to house Texas state government. Altogether it houses the chambers of the Texas Legislature and the office of the governor of Texas. It was originally designed in 1881 by architect Elijah E. Myers, and was constructed from 1882 to 1888 under the direction of civil engineer Reuben Lindsay Walker. A $75 million underground extension was completed in 1993. The building was added to the National Register of Historic Places in 1970 and recognized as a National Historic Landmark in 1986. The Texas State Capitol building stands 308 ft (94 m) tall.

The capitol rotunda features portraits of every person who has served as president of the Republic of Texas or governor of the State of Texas. The south foyer features sculptures of Sam Houston and Stephen F. Austin made by Elisabeth Ney. The rotunda is also a whispering gallery. The capitol has 360,000 square feet (33,000 square meters) of floor space, more than any other state capitol building, and occupies 2.25 acres of land. The building has nearly 400 rooms and more than 900 windows.

Why You Should Visit:
Once the tallest capitol building in the nation, it shows off many of the natural resources, such as limestone and the landscapes, which are so prevalent in Texas. Lots of statues, memorials, great history and fun architecture to look at.
Image by Matthew Rutledge on Flickr under Creative Commons License.
Sight description based on wikipedia