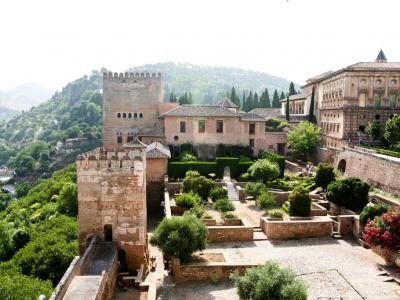 The Alhambra Palace and Fortress Complex, Granada (must see)

Alhambra in Arabic is "The Red One." It is a palace and fortress complex. It was originally built on the ruins of a Roman fortress in 889. It was rebuilt in the 13th century by the Muhammad I of Granada, the first ruler of the Emirate of Granada. It was converted to a palace by Yusuf I, Sultan of Granada. In 1492 it became the royal court of Ferdinand and Isabella.

The Alhambra was the place where Christopher Columbus received his commission to find the Indies which he never found. In 1526 Charles I of Spain ordered a Renaissance palace in the Mannerist style with its humanism contrasting with Nasrid architecture. After the decline of Nasrid influence, the Alhambra complex fell into neglect and disrepair.

Centuries later after Napoleon I had destroyed the site, the Alhambra was rediscovered. It is today one of the greatest tourist attractions in Spain. The Alhambra is a UNESCO World Heritage Site. It has been described by poets as a pearl in emeralds. This was a literal description of the colors of the stones imbedded in the surrounding woods.

The Alhambra park is stocked with nightingales. Running water from the fountains and cascades can be heard at all times. The idea was to create a kind of "paradise on earth." The exterior was made to be plain and austere.

The Alcazaba, also known as the old citidel, is the oldest part. All that is left are the great outer walls, towers and ramparts. Beyond the Alcazaba is the palace of the Arab rulers. There are the Nasrid Palaces of Alhambra and then the Alhambra Alta. originally meant for court officials.

The royal palace is of three parts. The Mexuar is plain and simple. It was for functions of business and government. Sersllo contains the Court of the Myrtles. The Harem is richly decorated. It was the living quarters for the wives and mistresses of the Sultan. It provided hot and cold running water, including showers.

Poets of the Nasrid period made poems for the Palace. Lines are inscribed in arches and columns in arabesque, cursive script. "There is no victor but God." appears often.

Why you should visit
One should visit often in order to focus on the different places of interest. There are so many, all of them captivating. Don't travel thousands of miles to see a Spanish McDonald's. Visit to see what you can see nowhere else.

Tips
Be prudent about crowds. There were cutpurses in Nasrid times, there are pickpockets now.
Image by Sharon Mollerus on Flickr under Creative Commons License.