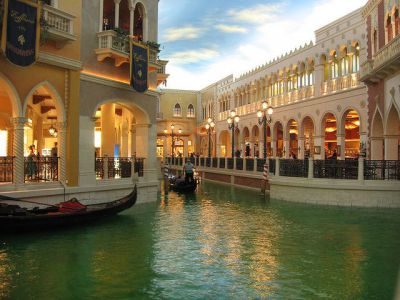 The Canals of The Venetian Resort, Hotel and Casino, Las Vegas (must see)

The Venetian Resort Hotel Casino is a luxury hotel and casino resort situated between Harrah's and The Palazzo on the east side of the Las Vegas Strip, on the site of the old Sands Hotel. The complex is the world's second-largest hotel, with 4,049 rooms, 3,068 suites ranging in price from $169 to $10,000 per night and a 120,000-square-foot (11,000 m2) casino.

The Canals of The Venetian Hotel are a grandiose architectural achievement. Apart from affording an outstanding view, it recreates a great deal of Italian atmosphere, making it a very romantic place. The hotel uses Venice, Italy as its design inspiration and features architectural replicas of various Venetian landmarks, such as the Palazzo Ducale, Piazza San Marco, Piazzetta di San Marco, the Lion of Venice Column & the Column of Saint Theodore, St Mark's Campanile, and the Rialto Bridge.

The resort opened on May 3, 1999, with flutter of white doves, sounding trumpets and singing gondoliers. Actress Sophia Loren joined The Venetian Chairman and Owner, Sheldon G. Adelson, in dedicating the first motorized gondola. Built at a cost of $1.5 billion, it was one of the most expensive resorts of its kind when opened.

On June 27, 2003, the 1,013-room Venezia Tower opened, built on top of the garage parking lot. Designed by KlingStubbins, the hotel tower contains 36 stories and rises 475 feet (145 m).
Image Courtesy of Flickr and Ken Lund.
Sight description based on Wikipedia.