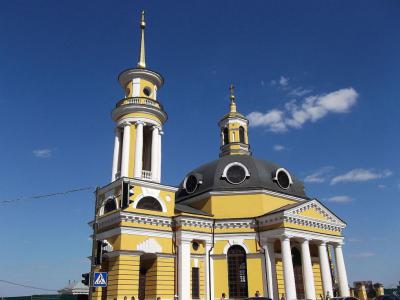 The Church of the Nativity of Christ, Kiev

Sitting on the bank of the river Dnieper in the Podil district, the Church of the Nativity of Christ is an eye catcher replete with elaborate elements and elegant lines. Relatively small, as compared to other religious buildings in Kiev, this church is a must see for anyone who can appreciate a 19th century edifice carefully restored to the original splendour.

The ground on which the church stands today has a long history and seen many religious structures going up and down at the hands of foreign barbarians and local revolutionaries.

The first stone church in this place (preceded by many wooden churches claimed by fires) was reportedly built in 1717 by Roman Tykhonovych, then governor of Kiev. Quite soon it proved too small for a growing community and, in 1744, had to be enlarged, which was again not quite enough. The whole structure was pulled down in the early 19th century and built anew. The new church went down in history as the one in which the body of Taras Shevchenko, prominent Ukrainian poet, was laid for a few hours en route to his burial place in the town of Kaniv. That church was also demolished in the 1930s together with many other religious buildings in Kiev.

In 2002, the Church of the Nativity of Christ was restored by a group of architects under the guidance of Yury Losytsky, based on the original blueprints created by Andriy Melensky.
Image by Butko on Wikimedia under Creative Commons License.