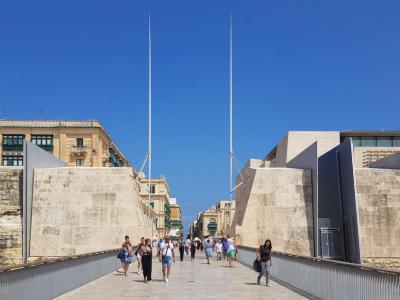 City Gate - also known as Putirjal in Maltese - is the main entrance to Malta's capital city, a UNESCO World Heritage Site. It is most commonly called Bieb il-Belt, "Door to the city".

The original gate, known as Porta San Giorgio, was designed by military engineer Francesco Laparelli de Carotona, and was erected between April 1566 and 1569. It was replaced in 1632 by a more ornate gate designed by Maltese architect Tommaso Dingli.

In 1853, at the height of British rule over Malta, a new gate designed by a certain Col. Thompson of the Royal Engineers was erected, consisting of two central arches with two smaller ones. Throughout the 19th and early 20th centuries, City Gate was known as Porta Reale.

The fourth City Gate was inaugurated in 1964 and it was part of a project that never materialised, that of redeveloping the entrance to Valletta and the Royal Opera House.

The present City Gate (currently under construction) will be the fifth to have stood at the entrance to Valletta.
Image by Chris Brown on Wikimedia under Creative Commons License.
Sight description based on wikipedia