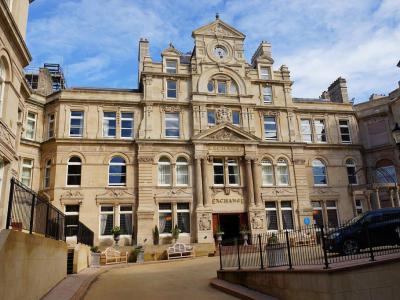 The Coal Exchange is a live music venue in Cardiff, originally used a market floor for trading in coal. Situated in Cardiff Bay, near The Point, it is used extensively for live music and other events on the Cardiff music scene. It has a capacity of 1,000. Before the Coal Exchange was built in Mount Stuart Square, the area was a residential square with a central garden. It was taken over by commerce as the city grew in prosperity. Coal merchants used to chalk up the changing prices of coal on slates outside their offices or struck deals in the local public houses.

As Cardiff became the biggest coal port in the world, the building was constructed between 1883 and 1886 by Edwin Seward as a base from which to conduct trade negotiations regarding the coal mines of the South Wales Valleys - most of which was shipped to Cardiff for distribution. The building played an important role in the industrial Cardiff of the 19th century. Paired Corinthian columns, an oak balcony, and rich wood paneling adorn the trading hall, which was reconstructed by Edwin Seward in 1911.

During the peak trading hour of midday to one o'clock, the floor might have as many as 200 men gesticulating and shouting. It was estimated that up to 10,000 people would pass in and out of the building each day. At one time the price of the world's coal was determined here.
Image Courtesy of Wikimedia and Chris Sampson.
Sight description based on Wikipedia.