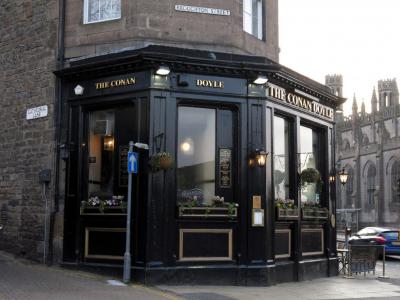 Sitting on the corner of York Place, conveniently close to many of the city’s iconic attractions, such as the Edinburgh Playhouse and the Scottish National Portrait Gallery, is a public house named after the creator of Sherlock Holmes, Sir Arthur Conan Doyle. This traditional pub is just a short walk from Conan Doyle's original residence on Picardy Place, in which he was born on 22 May 1859.

This part of the city has been populated since 1685, first by the French refugees who fled the province of Picardy following the revocation of the Edict of Nantes by Louis XIV which outlawed Protestantism; they built a “home away from home”, called the Picardy village.

Inside, The Conan Doyle celebrates the life of its legendary namesake with an array portraits and paraphernalia inspired by the esteemed crime writer's famous works. Other than that, however, the place is well known for its wide range of traditional quality Scottish pub food available all day long, as well as a drinks menu focusing on fine real cask ales and scotch whiskies, served up in a relaxing, Victorian-style surroundings. In addition to the spacious bar and restaurant, there is a mezzanine capable of holding up to 40 guests.

Visitors can pay homage to Conan Doyle outside the pub just as well, at a larger than life commemorative bronze statue of Sherlock Holmes, portrayed as if in meditation on the death of his author, which stands watch over the area, just across the street.
Image Courtesy of Wikimedia and Enric.