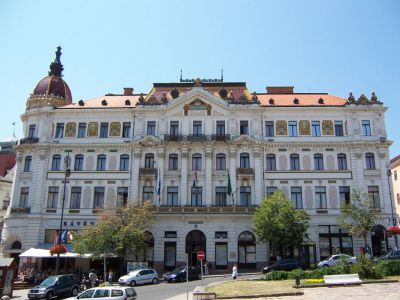 The County Hall, Pecs (must see)

The County Hall is probably the most beautifully decorated building on Széchenyi Square. Some of the decorations were made by the Zsolnay factory foremen. It was built in 1897. In 1954 part of the building burned down, but later it was reconstructed with a new roof that was simpler than previously. Notably, the front space of the building from the side of the street was constructed by Jesuits between 1716 and 1726. They took some tombstones from the Turkish cemetery. Curious visitors may notice wonderful frescos made by Ernő Gebauer, above the stairs, which describe the foundation of the first university of Pécs. There is also a small park in front of the building where you can see a marble bust of Leonardo da Vinci.
Image Courtesy of Wikimedia and Csörföly Dániel.

Want to visit this sight? Check out these Self-Guided Walking Tours in Pecs. Alternatively, you can download the mobile app "GPSmyCity: Walks in 1K+ Cities" from iTunes App Store or Google Play. The app turns your mobile device to a personal tour guide and it works offline, so no data plan is needed when traveling abroad.