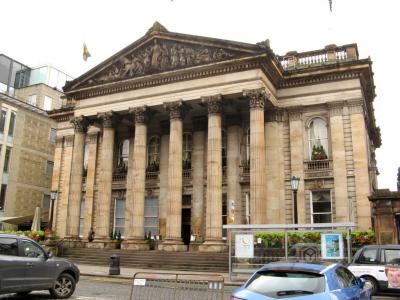 The Dome is a category A listed building on the New Town's George Street which today functions as a bar, restaurant and nightclub, operated by Caledonian Heritable group. First built in 1847, as the headquarters of the Commercial Bank of Scotland, it was designed by David Rhind in a Graeco-Roman style.

The edifice stands on the site of the old Physicians' Hall, the offices of the Royal College of Physicians of Edinburgh, which was constructed in the 18th century to the design by architect James Craig, the planner of the New Town. The fine Physicians' Hall was then largely demolished to create the current building, but certain parts of its frontage appear to be re-used, including the fine Corinthian columns.

The Scottish capitalist movement was an architectural turning point in Scotland at the time, and David Rhind, who saw this perspective of capitalism, traced the idea roots all the way back to the Greek society. In his Commercial Bank creation, not only did he capture the society's ideology but also a sense of beauty. In April 1847, The Scotsman newspaper wrote of the building, "'the rich and massive architecture of the front', and the interior decoration [are] 'in a style which is not less than gorgeous'".

David Rhind clearly took advantage of light source by constructing a glass dome, and made use of space with a large central lobby. Although one of the many Greek Revival style buildings found on George Street today, The Dome stands unique with its stunning pediment and long rich history.
Image by Jonathan Oldenbuck on Wikimedia under Creative Commons License.
Sight description based on wikipedia