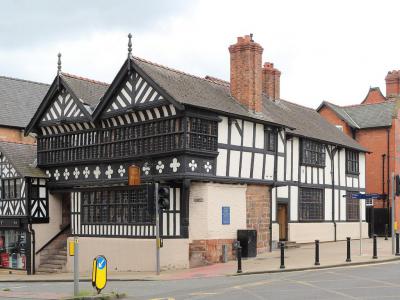 The Falcon is a public house in Chester. The building formerly incorporated part of Chester Rows, but it was the first building to have its portion of the row enclosed in the 17th century. The building originated as a house in about 1200 and was later extended to the south along Lower Bridge Street, with a great hall running parallel to the street. During the 13th century it was rebuilt to incorporate its portion of the row. The house was bought in 1602 by Sir Richard Grosvenor who extensively altered it some 40 years later to make it his town house. During the Civil War he moved his family here from his country home, Eaton Hall.

In the late 18th century the building ceased to be the town house of the Grosvenor family. It continued to be owned by them, and between 1778 and 1878 it was licensed as The Falcon Inn. In about 1879 alterations were made by John Douglas. At this time it was known as The Falcon Cocoa House and it was re-opened as a temperance house. By the 1970s the building had become virtually derelict. In 1979 the Falcon Trust was established, and the building was donated to the trust by the Grosvenor Estate. Between 1979 and 1982 the building was restored and in 1983 it won a Europa Nostra award.