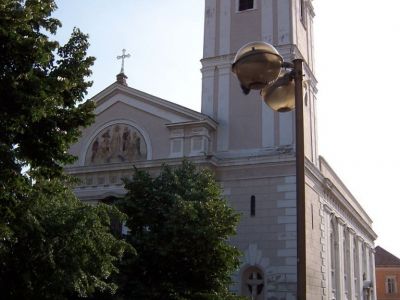 The Franciscan Church, Pecs (must see)

The Franciscan Church was first mentioned in the history of the town in 1280. The current church is eclectic and signs of its reconstruction from 1925 are also seen. The design of the church includes medieval and Baroque elements. The church was reconstructed and turned into a mosque during the Turkish occupation but later in 1720 it was returned to the Franciscans, who sold the roof of the mosque to cover the reconstruction. In spite of the several reconstructions that took place in the 1880s, 1890s and in 1925, the original Baroque tower was saved and is still a wonderful example of Baroque architecture. Visitors can find paintings by Ernő Gebauer on the facade and the "Taking of Saint Francis of Assisi" on the main altar.
Image by Csörföly Dániel on Wikimedia under Creative Commons License.