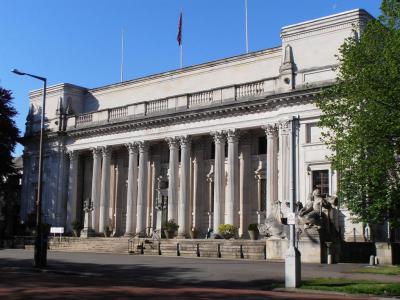 The Glamorgan Building is an Edwardian former county hall located in Cardiff in the prestigious civic centre in Cathays Park, on King Edward VII Avenue. Formerly the county hall of Glamorgan, the building was acquired by Cardiff University in 1997 and is now home to the School of Social Sciences and the School of City and Regional Planning. It is one of the most architecturally-distinguished buildings in the University's care. It was designed by Vincent Harris OBE and Thomas Anderson Moodie, who won the design competition for the building in 1909. The project was completed in 1911 and the building was opened in 1912. Outside the building, serving as reminders of the county's source of wealth, are two groups of statues by Albert H. Hodge, one representing navigation and the other coal mining.

This sight is featured in a self-guided walking tour of Cardiff, Wales within the mobile app "GPSmyCity: Walks in 1K+ Cities" which can be downloaded from iTunes App Store or Google Play. Please download the app to your mobile phone or tablet for travel directions for visiting this sight. The app turns your mobile device to a personal tour guide and it works offline, so no data plan is needed when traveling abroad.