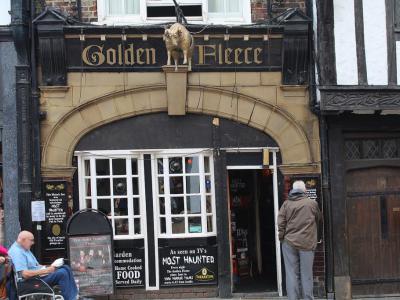 The Golden Fleece is an inn which has a free house pub on the ground floor and four guest bedrooms above. It was first mentioned in the York City Archives as far back as 1503 and is rumoured to be the most haunted public house in York.

The back yard of the inn is named "Lady Peckett's Yard" after Alice Peckett, the wife of John Peckett, who owned the premises and served as Lord Mayor of York around 1702. The lady Peckett is said to be the one haunting the place – in fact so much so that it was even featured in Most Haunted television series about supposedly paranormal phenomena.

Many guests have reported seeing the late Lady Peckett wandering the endless corridors and staircases in the wee hours. Including ghostly apparitions and moving furniture, hers is just one of the five resident spirits.

The inn was rebuilt in the 19th century and in 1983 was designated as a Grade II listed building by English Heritage.

The pub has a recognisable large golden fleece (sheep) hanging over the entrance. Whilst the the frontage is narrow, it is very deep, with a front bar, a corridor containing staircases and toilets leading to second bar, and past that a space with dining tables. There is further dining space upstairs, in an old-fashioned room with a set of armour.
Image Courtesy of Wikimedia and Chabe01.
Sight description based on Wikipedia.