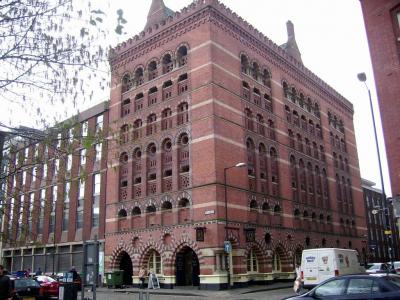 The Granary is on Welsh Back, Bristol. It was built in 1869 by Archibald Ponton and William Venn Gough with red Cattybrook brick with black and white brick and limestone dressings as a granary but has been used as offices. It is probably the best preserved example of the Bristol Byzantine style.

It has also been known as Wait and James' Granary. It housed a nightclub, also known as The Granary, from 1968 to 1988. Initially opened as a jazz club by Ted Cowell under the guidance of Acker Bilk in 1968, it started hosting regular rock nights in 1969, becoming an all-rock club by 1978. Many well-known rock acts played there, including Yes, Genesis, Status Quo, Motörhead and Iron Maiden. The building was owned by Bristol City Council who invited competitive bids from developers for its renovation and conversion. Barton Willmore produced the designs which supported the winning bid to convert the building into apartments.
Image by Steinsky on Wikimedia under Creative Commons License.
Sight description based on wikipedia