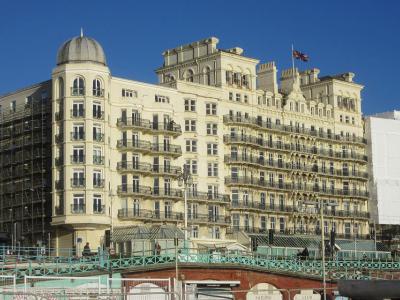 The Brighton Hotel Bombing happened on 12 October 1984 at the Grand Hotel in Brighton. The bomb was planted by Provisional Irish Republican Army (IRA) member Patrick Magee, with the intention of assassinating Prime Minister Margaret Thatcher and her cabinet who were staying at the hotel for the Conservative Party conference. Patrick Magee had stayed in the hotel under the false name of Roy Walsh during the weekend of 14–17 September 1984. During his stay, he planted the bomb under the bath in his room, number 629. The bomb detonated at 2:54 a.m. on 12 October. Margaret Thatcher was still awake at the time, working on her conference speech for the next day in her suite. It badly damaged her bathroom, but left her sitting room and bedroom unscathed. Both she and her husband Denis escaped injury. She changed her clothes and was then escorted to Brighton police station. As she left the police station, she gave an impromptu interview to the BBC's John Cole at around 4:00 a.m., where she said the conference would go on as usual. Thatcher went from the conference to visit the injured at the Royal Sussex County Hospital. The bomb failed to kill Thatcher or any of her government ministers.
Image by Hassocks5489 on Wikimedia under Creative Commons License.
Sight description based on wikipedia