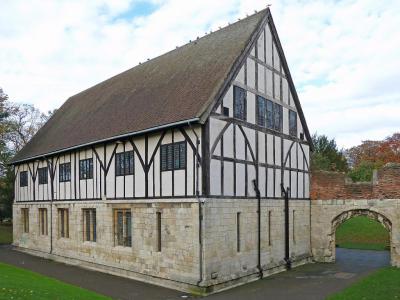 Located within York's Museum Gardens, between the ruins of St Mary's Abbey and the River Ouse, is a picturesque 14th-century building – the Hospitium. It was once part of a support complex on the abbey grounds which included a brewhouse, stables, mill, and a small boarding school.

While the original purpose of the building is not known for certain, the name Hospitium (related to hospitality) suggests that it was used for housing guests. The latter would have been visitors of low social rank, such as merchants, who were not allowed to stay in the main abbey with the monks.

Being so close to the river, it might also have been a warehouse or a barn, possibly with accommodation on the upper floor. The archway seen to the south east would have led to a water gate, well placed to serve guests arriving by boat. The lower storey of the building was most likely built from stone to withstand the regular floods occurring in the past.

The oldest parts of the stone ground floor mostly date to the 1300s, while the ruined gateway arch on the side was added around 1500.

Since the dissolution of the abbey, the Hospitium has gone through numerous stages of reuse, disrepair and renovation. In 1828, the newly founded Yorkshire Philosophical Society made significant repairs of the building and housed their collections here.

In the 1930s the upper storey was extended with a new roof. In 2008 the Hospitium underwent another key renovation with the installation, for the first time, of running water, toilets, a passenger lift, and a kitchen. Today the building serves as the centre of York Museum Trust's hospitality business.
Image Courtesy of Wikimedia and Tim Green.
Sight description based on Wikipedia.