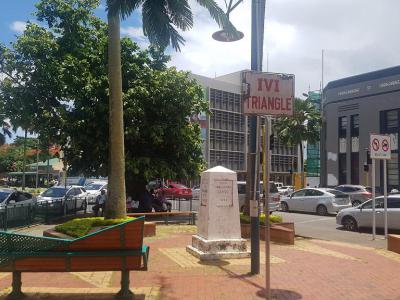 The true historical center of Suva is the Ivi Triangle, marked by the angular convergence of Renwick Road and Scott Street.

As was most of the land on the seaside of Victoria Parade, this area was filled in, and it now serves as a small park, with a bench under the ivi (Tahitian chestnut) tree at the apex, and (especially on ship days) a row of handicraft vendors at the base. Unfortunately, the venerable tree sustained enormous damage during Tropical Cyclone Ana, in January of 2021, but survived in diminished form. It’s hoped that, someday, it will return to its former glory.

Inside the triangle is what is usually called a “historic marker,” and it is a rather unusual one too, for three of its four inscriptions are wrong, even if only slightly so:

>> “Suva Proclaimed Capital in 1882.”
Well, not really. The Home Government approved the move in March 1877, the Queen gave her approval in May, and on Aug. 1 The London Times was the medium for the public proclamation. 1882 was the year of the government’s official move from Levuka.

>> “Public Land Sales on this spot 1880.”
Someone found the wrong ivi tree. The land sales were held farther down Thomson Street, near the site of Morris Hedstrom and Company’s (originally Morris, Hedstrom, Ltd.) store.

>> “British Crown Colony 10th October 1874.”
This one is right. Development has changed the appearance of much of Victoria Parade. But if you continue walking south, you can still find some buildings that reflect the earlier character of the street.
Image Courtesy of Nicholas Halter.