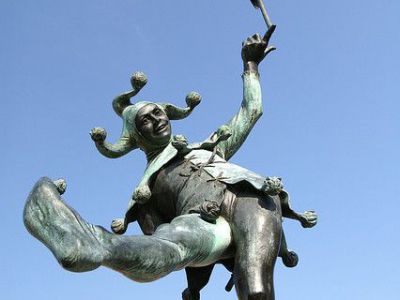 The Jester, Stratford-upon-Avon (must see)

The Jester is one of the most recent and famous Stratford landmarks. At the junction of Henley and Windsor Streets, the bronze Jester welcomes the public with a pole, a mask of comedy, and an extended heel, while hiding a tragedy mask behind his back. The statue was a gift from Anthony Bird, a native of Warwickshire. The Jester appeared in many Shakespeare plays, so his appearance just several yards from the poet's birthplace is rather symbolic. The Jester's plinth bears many interesting and appropriately funny Shakespearian quotations.
Image by Dave Hamster on Flickr under Creative Commons License.

This sight is featured in a self-guided walking tour of Stratford-upon-Avon, England within the mobile app "GPSmyCity: Walks in 1K+ Cities" which can be downloaded from iTunes App Store or Google Play. Please download the app to your mobile phone or tablet for travel directions for visiting this sight. The app turns your mobile device to a personal tour guide and it works offline, so no data plan is needed when traveling abroad.