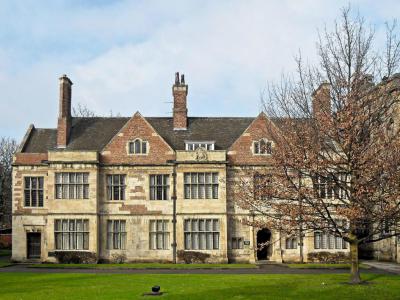 The King's Manor is a Grade I listed historical building and is part of the University of York. It lies on Exhibition Square, in the city center.

King's Manor was originally built to house the abbots of St Mary's Abbey, York. The Abbot's house probably occupied the site since the eleventh century, but the earliest remains date from the fifteenth century. When the abbey was dissolved in 1539, Henry VIII instructed that it be the seat of the Council of the North. It performed this role until the Council was abolished in 1641.

From 1667 to 1688, it was the residence of the Governor of York. During the Glorious Revolution of 1688, the Governor, Sir John Reresby, 2nd Baronet, remained loyal to the King, James II, but a party of armed men, led by Thomas Osborne, Earl of Danby, captured the Manor and the City of York, and held them for William of Orange. After 1688, the building was hired out to private tenants until the nineteenth century, when it was taken over and expanded by the Yorkshire School for the Blind.

On the departure of the Blind School in 1958, the Manor was acquired by York City Council, who leased it to the University of York in 1963.
Image Courtesy of Wikimedia and Tim Green.
Sight description based on Wikipedia.