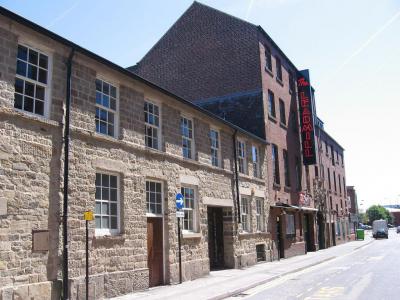 The Leadmill is a live music venue and nightclub in Leadmill Road, Sheffield, England lying on the south east edge of the city centre. It opened in 1980. The venue has also been voted favorite live music venue by readers of the NME on several occasions. The venue has recently hosted many gigs by bands such as Milburn, Coldplay, Snow Patrol, Killers, Enter Shikari, Klaxons, The Coral, Kids In Glass Houses, Elliot Minor, One Night Only, The Audition, The Maccabees and Sheffield's own Arctic Monkeys who in 2005 sold out the Leadmill in a quicker time than any other band.
Image by Warofdreams on Wikimedia under Creative Commons License.
Sight description based on wikipedia

This sight is featured in a self-guided walking tour of Sheffield, England within the mobile app "GPSmyCity: Walks in 1K+ Cities" which can be downloaded from iTunes App Store or Google Play. Please download the app to your mobile phone or tablet for travel directions for visiting this sight. The app turns your mobile device to a personal tour guide and it works offline, so no data plan is needed when traveling abroad.