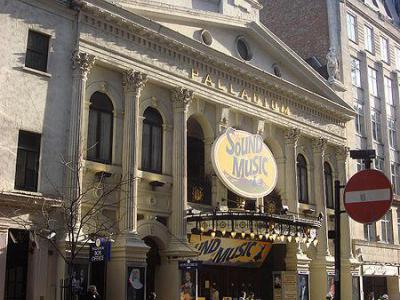 The Beatles made their debut on the top variety show of the time, Sunday Night at The London Palladium on October 13, 1963. The Palladium was, and still is, London's most famous theatre, and the show was one of the absolute moments of the band's undeniable fame.

Watched by 15 million TV viewers, the Beatles performed “From Me to You”, “I’ll Get You”, “She Loves You”, and “Twist and Shout”. Their press officer recalled that after the Palladium appearance he no longer had to contact the press to get them interested in the band, because the press started contacting him.

The papers the following day reported scenes of screaming fans inside and outside The Palladium and one of the papers coined the phrase, “Beatlemania” – which was not, as some may have thought, just ‘being enthusiastic about the Beatles’. At the height of Beatlemania, teenagers tried to run through police barricades and people regularly fainted. Cleaning staff at theatres used to dread Beatles concerts because fans would lose control to the point that they involuntarily urinated. Every “mania” that everyone has talked about since is not anything compared to Beatlemania which really did ignite the world.

By 1964 the Beatles were everywhere, they were pretty much inescapable and dominated everything they could dominate. The “mania” began to tail off towards the end of 1965, and finally came to an end around 1970.
Image by Panhard on Wikimedia under Creative Commons License.